Half way done for the block a month!  This flying geese pattern is done a completely different way than before.  I didn't take any pictures, but I sure should have, because there are some tricky parts.

First, notice and be careful with the measurements of each material.

The first page is simple.  You draw the diagonal line on the white background.  You line it up as it is shown.  Then you sew ON THE LINE.  Then you use a measuring block and leave a 1/4 from the line that was sewn and then cut off the rest.  Next you IRON.  Then flip it around and do the other two corners to get the finished product on the right of the first page.  Put this aside. 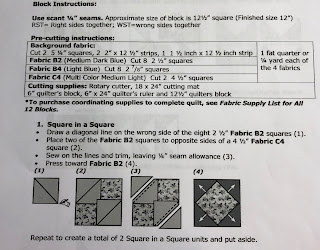 You will draw a diagonal line on the wrong side of Fabric B4.  *** THEN use the measuring block and draw TWO MORE LINES 1/4 away from the middle on either side.  Trust me - do this!!

You should have three lines on the wrong side of Fabric B4.

Line up the Fabric B4 as shown.  Make sure that the lines from each of the B4 matches up, because when you go to sew, your sewing NOT ON THE MIDDLE - repeat, do NOT SEW ON THE MIDDLE!!  You are leaving the middle line ALONE.  Sew ONLY on the two extra lines on the right and the left of the middle line!!  Sew straight down both blocks on the right and left lines.  READ BELOW PICTURE. 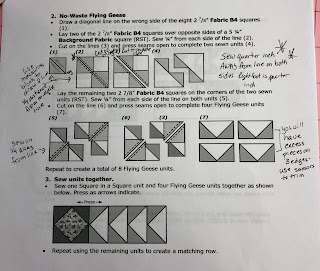 After sewing the two lines on either side, you will CUT on the middle line.  Then iron them out.

Take the remaining Fabric B4 squares and put the three lines on them as you did already.  Line it up as shown above.  Sew on the LEFT AND RIGHT.  Cut on the middle.  Iron it out and there, you have you flying geese.   You will notice that there are probably three edges that have excess material - use the scissors to trim this.

Before you sew the geese and edge block together - LINE IT UP.  Be careful when you pin it to make sure it's going in the way it's supposed to.  Remember, one line of geese face one way and the other faces the opposite.

Then you just have the middle, top and bottom to sew!  Sew the middle to one piece.  Make sure it's lined up correctly.  Sew the large top piece to the middle.  Then do the upper and lower pieces to finish it off. 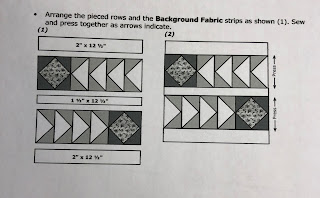 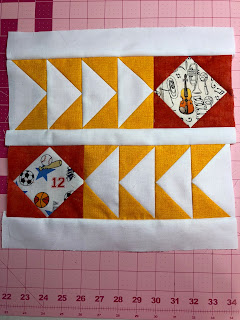 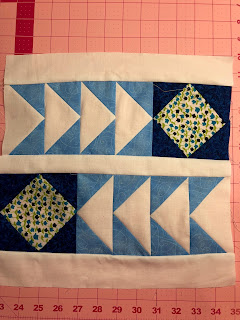 Aleta
I like to keep things simple. Life is difficult enough. 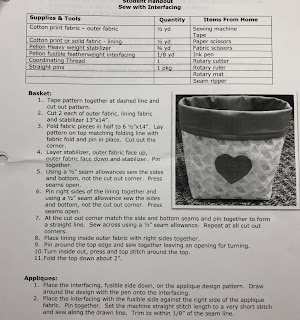